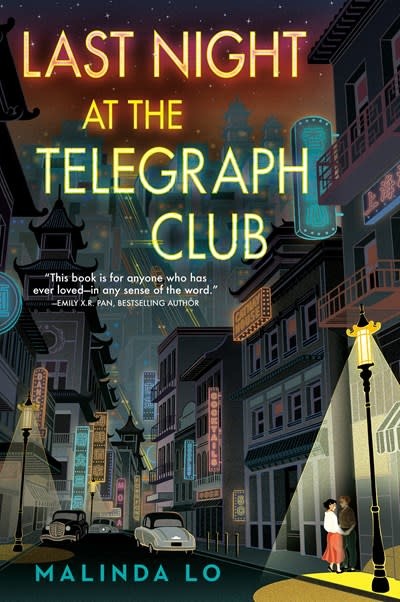 Last Night at the Telegraph Club

Winner of the 2022 Stonewall Book Awards for Young Adult Literature!

Winner of the 2022 Asian/Pacific American Award for Youth Literature!

Malinda Lo’s bestselling and National Book Award longlisted masterpiece is a gripping story of love and duty set in San Francisco’s Chinatown during the 1950s. Now in paperback.

“That book. It was about two women, and they fell in love with each other.” And then Lily asked the question that had taken root in her, that was even now unfurling its leaves and demanding to be shown the sun: “Have you ever heard of such a thing?”

Lily Hu can’t remember exactly when the question took root, but the answer was in full bloom the moment she and Kathleen Miller walked under the flashing neon sign of a lesbian bar called the Telegraph Club.

America in 1954 is not a safe place for two girls to fall in love, especially not in Chinatown. Red-Scare paranoia threatens everyone, including Chinese Americans like Lily. With deportation looming over her father, Lily and Kath risk everything to let their love see the light of day.

Malinda Lo is the critically acclaimed author of several young adult novels, including most recently A Line in the Dark, which was a Kirkus Best YA Book of 2017 and one of Vulture’s 10 Best YA Books of 2017. Her novel Ash, a lesbian retelling of Cinderella, was a finalist for the William C. Morris YA Debut Award, the Andre Norton Award for YA Science Fiction and Fantasy, the Mythopoeic Fantasy Award, and was a Kirkus Best Book for Children and Teens. She has been a three-time finalist for the Lambda Literary Award. Malinda’s nonfiction has been published by the New York Times Book Review, NPR, the Huffington Post, The Toast, the Horn Book, and the anthologies Here We Are, How I Resist, and Scratch. She lives in Massachusetts with her wife.