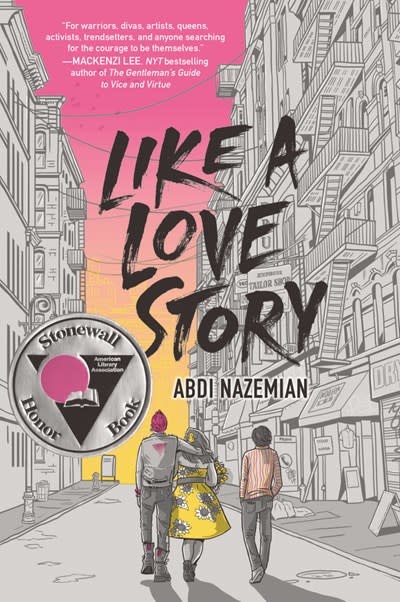 Stonewall Honor Book!Now in paperback, a bighearted, epic love letter to the LGBTQ community about three friends falling in love and finding their voices as activists during the height of the AIDS crisis—from Lambda Literary Award–winning author Abdi Nazemian.

It’s 1989 in New York City, and for three teens, the world is changing.Reza is an Iranian boy who has just moved to the city with his mother to live with his stepfather and stepbrother. He’s terrified that someone will guess the truth he can barely acknowledge about himself. Reza knows he’s gay, but all he knows of gay life are the media’s images of men dying of AIDS.Judy is an aspiring fashion designer who worships her uncle Stephen, a gay man with AIDS who devotes his time to activism as a member of ACT UP. Judy has never imagined finding romance...until she falls for Reza and they start dating.Art is Judy’s best friend, their school’s only out-and-proud teen. He’ll never be who his conservative parents want him to be, so he rebels by documenting the AIDS crisis through his photographs.As Reza and Art grow closer, Reza struggles to find a way out of his deception that won’t break Judy’s heart—and destroy the most meaningful friendship he’s ever known.This is a bighearted, sprawling epic about friendship and love and the revolutionary act of living life to the fullest in the face of impossible odds.

Abdi Nazemian is the author of The Authentics. His novel The Walk-In Closet won the Lambda Literary Award for LGBT Debut Fiction. His screenwriting credits include the films The Artist’s Wife, The Quiet, and Menendez: Blood Brothers and the NBC television series The Village. He has been an executive producer and associate producer on numerous films, including Call Me by Your Name, Little Woods, and The House of Tomorrow. He lives in Los Angeles with his fiancé and their two children. Find him online at www.abdaddy.com.