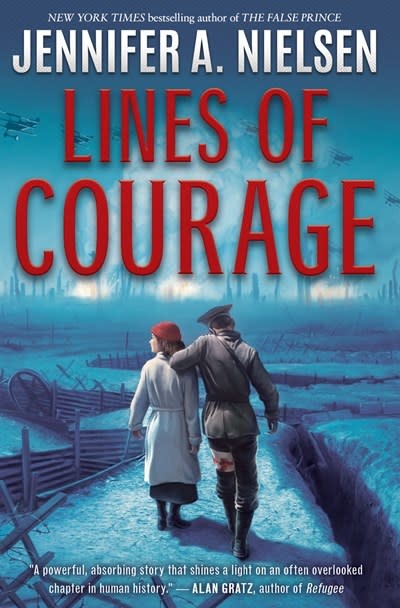 Jennifer A. Nielsen, award-winning author of A Night Divided and Rescue, artfully weaves together the stories of five kids living through World War I, each of whom holds the key to the others' futures... if they are lucky -- and brave -- enough to find each other.World War I stretches its cruel fingers across Europe, where five young people, each from different backgrounds and nations, face the terror of battle, the deprivations of hunger, and all the awful challenges of war.Felix, from Austria-Hungary, longs for the bravery to resist Jewish deportations before his own family can be taken.Kara, from Britain, dreams of someday earning her Red Cross pin and working as a nurse -- or even a doctor.Juliette, of France, hopes her family can remain knitted together, despite her father's imprisonment, as the war's longest battle stretches on and on.Elsa, from Germany, hopes her homing pigeon might one day bring her a friend from out of the chaos.And Dimitri, of Russia, wants only to survive the front, where he's been sent with no weapon.None of them will find exactly what they want. But the winds of fate may cross their paths to give each of them just what they need. And in this remarkable exploration of World War I by critically acclaimed author Jennifer A. Nielsen, they will discover that friendship and courage can light the way through the most frightening of nights."A powerful, absorbing story that shines a light on an often overlooked chapter in human history." -- Alan Gratz, #1 New York Times bestselling author of Refugee

Jennifer A. Nielsen is the acclaimed author of the New York Times and USA Today bestselling Ascendance Series: The False Prince, The Runaway King, The Shadow Throne, The Captive Kingdom, and The Shattered Castle. She also wrote the New York Times bestseller The Traitor's Game and its sequels,The Deceiver's Heart, and The Warrior's Curse; the New York Times bestselling Mark of the Thief trilogy: Mark of the Thief, Rise of the Wolf, and Wrath of the Storm; the standalone fantasy The Scourge; and the critically acclaimed historical thrillers A Night Divided, Resistance, Words on Fire, Rescue, and Lines of Courage. Jennifer collects old books, loves good theater, and thinks that a quiet afternoon in the mountains makes for a nearly perfect moment. She lives in northern Utah with her family, and is probably sneaking in a bite of dark chocolate right now. You can visit her online at jennielsen.com or follow her on Twitter and Instagram at @nielsenwriter.