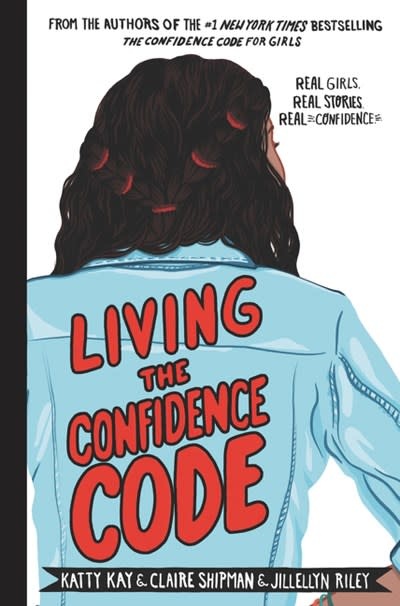 The authors of the bestselling phenomenon The Confidence Code for Girls, which spent TWENTY-EIGHT WEEKS on the New York Times middle grade bestseller list, return to share more confidence-boosting advice and the stories of real-life Girls of Action making a difference in the world today.

The Confidence Code for Girls spent twenty-eight weeks on the New York Times bestseller list! Clearly, the tenants of the confidence code (risk more, think less, and be yourself!) are resonating with women and girls across the country.Journalists Katty Kay and Claire Shipman want to continue inspiring girls to become their most confident selves with Living the Confidence Code, a middle grade biography collection starring today’s brightest, most determined girls around the world, who have used their confidence to successfully make their dreams come true.Written in Katty and Claire’s relatable, accessible style, this paper-over-board book will include profiles of 25–30 girls, along with in-depth interviews and graphic novel panels. Below is a list of the current confirmed participants for the book. The authors are aiming to include two-thirds girls who have achieved spectacular things on a large scale or in the public eye and one-third girls who have overcome personal obstacles or made a difference in a more relatable, everyday way.

· Anahi Molano (17, started a thrift store in her school to help kids who can’t afford warm clothing, US)

· Riley Morrison (9, pushed for Under Armour to offer basketball shoes for girls, US)

· Mena & Zena Nasiri (14 & 16, sisters who founded a nonprofit to get books with Muslim heroines in libraries, US)

· Angelina Tropper (11, founder of a charity/speaks about learning disabilities, Canada)

· Yekaba Abimbola (13, stopped her own child marriage so she could stay in school to become a doctor, Ethiopia)

Katty Kay and Claire Shipman are two friends and reporters who started writing books together ten years ago. Together, they wrote two New York Times bestsellers, Womenomics and The Confidence Code: The Science and Art of Self-Assurance—What Women Should Know. They’ve become passionate about getting their message about being powerful directly to girls. Katty is the Washington, DC, anchor for BBC World News America. Claire has been a TV reporter for CNN, NBC, and ABC. Katty has one husband, four children, and a cat. Claire has one husband, two children, and too many dogs. Their dedicated book site is www.theconfidencecode.com.Katty Kay is the anchor of BBC World News America, based in Washington, DC. She is also a frequent contributor to Meet the Press and Morning Joe, and a regular guest host for The Diane Rehm Show on NPR. In addition to her work on women’s issues, Kay has covered the Clinton administration sex scandal; four presidential elections; and the wars in Kosovo, Afghanistan, and Iraq. She was at the Pentagon just twenty minutes after a hijacked plane flew into the building on 9/11—one of her most vivid journalistic memories is of interviewing soldiers still visibly shaking from the attack. Katty grew up all over the Middle East, where her father was posted as a British diplomat. She studied modern languages at Oxford and is a fluent French and Italian speaker with some “rusty Japanese.” Kay juggles her journalism with raising four children with her husband, a consultant.Claire Shipman is a journalist, author, and public speaker. Before turning to writing, Claire spent almost three decades as an award-winning television journalist. For the last fourteen years Claire was a regular contributor to Good Morning America and other national broadcasts for ABC News. Before that she served as White House correspondent for NBC News where she regularly reported on presidential policy and politics for NBC Nightly News and TODAY. Prior to that, she worked for CNN for a decade, covering the White House, and also posted in Moscow for five years, covering the fall of the Soviet Union. Claire’s reporting from Moscow helped CNN earn a National Headliners Award and a coveted Peabody award. She received a DuPont Award and an Emmy Award for coverage of the 1989 Tiananmen Square student uprising, and a DuPont Award for CNN’s coverage of the 1995 Oklahoma City bombing. She graduated from Columbia College and later earned a master’s degree from the School of International Affairs there. She’s now a member of Columbia’s Board of Trustees. She lives in Washington, DC, with her husband, Jay Carney, who served as White House Press Secretary for the Obama Administration (2011–2014) and their two children and three dogs.