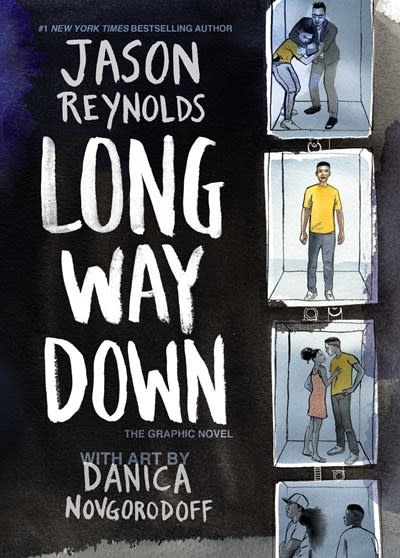 Will feels a sadness so great, he can’t explain it. But in his neighborhood, there are THE RULES:

But bullets miss. You can get the wrong guy. And there’s always someone else who knows to follow the rules…

Jason Reynolds is a #1 New York Times bestselling author, a Newbery Award Honoree, a Printz Award Honoree, a two-time National Book Award finalist, a Kirkus Award winner, a Carnegie Medal winner, a two-time Walter Dean Myers Award winner, an NAACP Image Award Winner, and the recipient of multiple Coretta Scott King honors. He’s also the 2020–2021 National Ambassador for Young People’s Literature. His many books include All American Boys (cowritten with Brendan Kiely), When I Was the Greatest, The Boy in the Black Suit, Stamped, As Brave as You, For Every One, the Track series (Ghost, Patina, Sunny, and Lu), Look Both Ways, and Long Way Down, which received a Newbery Honor, a Printz Honor, and a Coretta Scott King Honor. He lives in Washington, DC. You can find his ramblings at JasonWritesBooks.com.

Danica Novgorodoff is an artist, writer, graphic designer, and horse wrangler who lives in Kentucky. Her books include A Late Freeze; Slow Storm; Refresh, Refresh (included in The Best American Comics 2011); and The Undertaking of Lily Chen. Her art and writing have been published in Artforum, Esquire, Virginia Quarterly Review, Slate, Orion, Seneca Review, Ecotone Literary Magazine, and many others. She was awarded a 2015 New York Foundation for the Arts fellowship in literature and was named Sarabande Books’ 2016 writer-in-residence. She has been a fellow at the MacDowell Colony, Blue Mountain Center, VCCA, Brush Creek Foundation for the Arts, and Willapa Bay AiR. Visit her online at DanicaNovgorodoff.com.