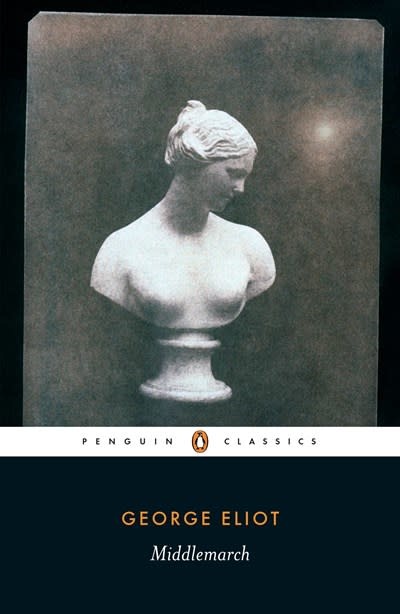 George Eliot's Victorian masterpiece: a magnificent portrait of a provincial town and its inhabitants

George Eliot’s novel, Middlemarch: A Study of Provincial Life, explores a fictional nineteenth-century Midlands town in the midst of modern changes. The proposed Reform Bill promises political change; the building of railroads alters both the physical and cultural landscape; new scientific approaches to medicine incite public division; and scandal lurks behind respectability. The quiet drama of ordinary lives and flawed choices are played out in the complexly portrayed central characters of the novel—the idealistic Dorothea Brooke; the ambitious Dr. Lydgate; the spendthrift Fred Vincy; and the steadfast Mary Garth. The appearance of two outsiders further disrupts the town’s equilibrium—Will Ladislaw, the spirited nephew of Dorothea’s husband, the Rev. Edward Casaubon, and the sinister John Raffles, who threatens to expose the hidden past of one of the town’s elite. Middlemarch displays George Eliot’s clear-eyed yet humane understanding of characters caught up in the mysterious unfolding of self-knowledge. This Penguin Classics edition uses the second edition of 1874 and features an introduction and notes by Eliot-biographer Rosemary Ashton. In her introduction, Ashton discusses themes of social change in Middlemarch, and examines the novel as an imaginative embodiment of Eliot's humanist beliefs.

For more than sixty-five years, Penguin has been the leading publisher of classic literature in the English-speaking world. With more than 1,500 titles, Penguin Classics represents a global bookshelf of the best works throughout history and across genres and disciplines. Readers trust the series to provide authoritative texts enhanced by introductions and notes by distinguished scholars and contemporary authors, as well as up-to-date translations by award-winning translators.

George Eliot (Mary Ann Evans Cross) was born on November 22, 1819 at Arbury Farm, Warwickshire, England. She received an ordinary education and, upon leaving school at the age of sixteen, embarked on a program of independent study to further her intellectual growth. In 1841 she moved with her father to Coventry, where the influences of “skeptics and rationalists” swayed her from an intense religious devoutness to an eventual break with the church. The death of her father in 1849 left her with a small legacy and the freedom to pursue her literary inclinations. In 1851 she became the assistant editor of the Westminster Review, a position she held for three years. In 1854 came the fated meeting with George Henry Lewes, the gifted editor of The Leader, who was to become her adviser and companion for the next twenty-four years. Her first book, Scenes of a Clerical Life (1858), was followed by Adam Bede (1859), The Mill on the Floss (1860),Silas Marner (1861), and Middlemarch (1872). The death of Lewes, in 1878, left her stricken and lonely. On May 6, 1880, she married John Cross, a friend of long standing, and after a brief illness she died on December 22 of that year, in London.

Rosemary Ashton, Professor of English Literature at University College, London, is the editor of the Penguin Classics edition of Middlemarch.