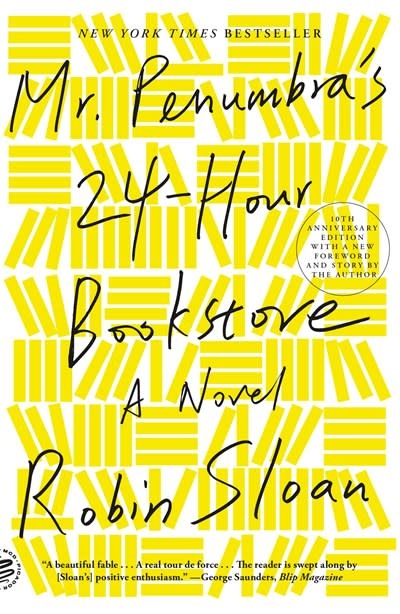 The beloved New York Times bestseller, now in a 10th Anniversary Edition with a new foreword by Paul Yamazaki and story by the author

“A real tour de force [and] a beautiful fable . . . The reader is swept along by Sloan’s enthusiasm.”

The Great Recession has shuffled Clay Jannon away from life as a San Francisco web-design drone and into the aisles of Mr. Penumbra’s 24-Hour Bookstore. But after a few days on the job, Clay discovers that the store is more curious than either its name or its gnomic owner might suggest. The customers are few, and they never seem to buy anything—instead, they “check out” large, obscure volumes from strange corners of the store.

Suspicious, Clay engineers an analysis of the clientele’s behavior, seeking help from his variously talented friends. But when they bring their findings to Mr. Penumbra, they discover the bookstore’s secrets extend far beyond its walls. Rendered with irresistible brio and dazzling intelligence, Mr. Penumbra’s 24-Hour Bookstore is exactly what it sounds like: an establishment you have to enter and will never want to leave.

Robin Sloan is the author of Sourdough. He grew up in Michigan and now splits his time between the Bay Area and the internet.