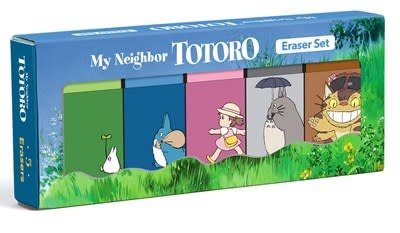 Celebrated for being one of the best hand-drawn films in the history of animation, My Neighbor Totoro is a true inspiration. This set of five erasers feature full-color sleeves with images of Totoro and friends as they walk through the forest—all packaged in a cute box with a die-cut window. These erasers are a delightful way to fix mistakes, and an essential desk accessory for Totoro fans of all ages.

• Makes a great gift for Studio Ghibli and animation fans; collectors; artists; and anyone who owns other My Neighbor Totoro products or loves cute Japanese art, stationery, and pop culture

Studio Ghibli is a Tokyo-based animation film studio founded in 1985 by directors Isao Takahata and Hayao Miyazaki. The studio has produced more than 20 feature-length films, many of which have garnered numerous awards and critical acclaim, including My Neighbor Totoro, Kiki's Delivery Service, Princess Mononoke, and the Academy Award–winning Spirited Away. Their last four films—The Wind Rises, The Tale of the Princess Kaguya, When Marnie Was There, and The Red Turtle—were all nominated for Academy Awards for Best Animated Feature Film.