Home » Nate the Great and the Earth Day Robot 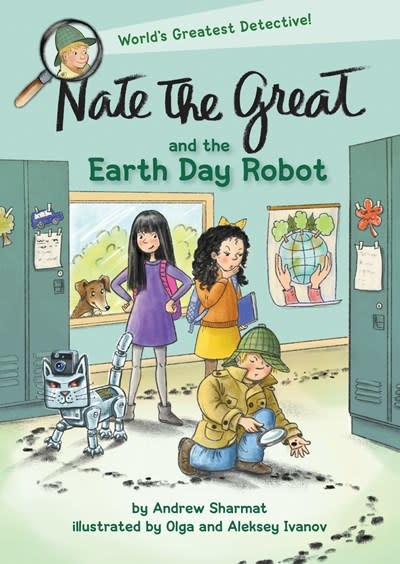 Nate the Great and the Earth Day Robot

Join the world’s greatest detective, Nate the Great, as he solves the mystery of the missing Earth Day robot in this long-running chapter book series that’s a favorite for beginner readers!

WILL THIS CASE ROLL AWAY?

The Earth Day Fair is days away, but Nate’s classroom project—a robot named Mr. Butler—has disappeared. Nate the Great and his dog, Sludge, take on the unusual case, and they are soon searching high and low in and around the school. Will Nate find the robot in time for the fair?

Andrew Sharmat is the son of Marjorie Weinman Sharmat and Mitchell Sharmat. Nate the Great and the Earth Day Robot is his first solo Nate the Great mystery after having previously collaborated with his mother.

Jody Wheeler developed a greater-than-average interest in children’s books at an early age, having been influenced and encouraged by her great-aunt Opal Wheeler, a prolific writer of books for young readers in the 1950s. Since being trained as a fine artist and educator, Jody has enjoyed working on projects ranging from picture books to educational texts and magazines, and from greeting cards to coloring books. She divides her time between Manhattan and Ballston Spa, NY.