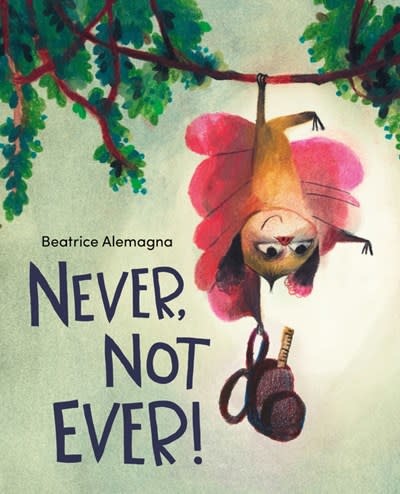 Anxious about starting school, Pascaline shrinks her parents (accidentally!) and then decides to bring them along to her first day--where instead of being a comfort, they drive her crazy!

Charming and laugh-out-loud funny, this irresistible first-day of school saga is going to be a repeat read!Pascaline (a bat) DOES NOT WANT to go to school. It doesn't matter who else is going! She knows exactly what she doesn't want. "Never, Not Ever!" she shrieks loudly on the first day. So loudly, in fact, that something amazing happens and it changes everything. Beatrice Alemagna is one of the most admired picture book illustrators of our time. With fans all over the world and books published in more than 13 countries, she uses art and story to explore the depths of children's feelings as few other illustrators have. Her colors, her characters' expressions, and her nontraditional self-taught style point to an inner playfulness and warmth that goes straight to the heart. With Never, Not Ever! Beatrice Alemagna does something special--she shares both points of view--the parents and the children's--in a battle of wills.

Beatrice Alemagna was born in Bologna, Italy, in 1973. At eight years old she knew she would become a painter and a writer. Since then she has published more than thirty books all over the world—from France and Italy to Japan and the United States. Some of her books available in the United States include A Lion in Paris, which Kirkus Reviews called an “artful, whimsical delight,” and The Wonderful Fluffy Little Squishy, which won the 2016 Mildred L. Batchelder Award. IN 2017, her HarperCollins book, On a Magical Do-Nothing Day was awarded a New York Times Best Illustrated book of the year and was awarded with a Gold Medal from the Society of Illustrators. Beatrice makes her home in Paris, where she lives with her husband and two daughters.Visit her at www.beatricealemagna.com.