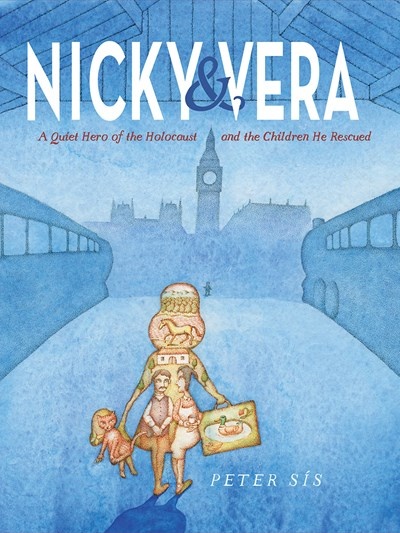 An Amazon Best Book of the Month.Caldecott Honoree and Sibert Medalist Peter Sís honors a man who saved hundreds of children from the Nazis.

In December 1938, a young Englishman canceled a ski vacation and went instead to Prague to help the hundreds of thousands of refugees from the Nazis who were crowded into the city. Setting up a makeshift headquarters in his hotel room, Nicholas Winton took names and photographs from parents desperate to get their children out of danger. He raised money, found foster families in England, arranged travel and visas, and, when necessary, bribed officials and forged documents. In the frantic spring and summer of 1939, as the Nazi shadow fell over Europe, he organized the transportation of almost 700 children to safety.Then, when the war began and no more children could be rescued, he put away his records and told no one. It was only fifty years later that a chance discovery and a famous television appearance brought Winton’s actions to light.Peter Sís weaves Winton’s experiences and the story of one of the children he saved, Vera Gissing. Nicky & Vera is a tale of decency, action, and courage told in luminous, poetic images by an internationally renowned artist.

Peter Sís is the Czech-born author/illustrator of three Caldecott Honor books, including The Wall, which also won the Sibert Medal. He is the first children's book illustrator to win the MacArthur Fellowship, and also won the Hans Christian Andersen Award. He lives in Irvington, New York.