Home » Not All Sheep Are Boring! 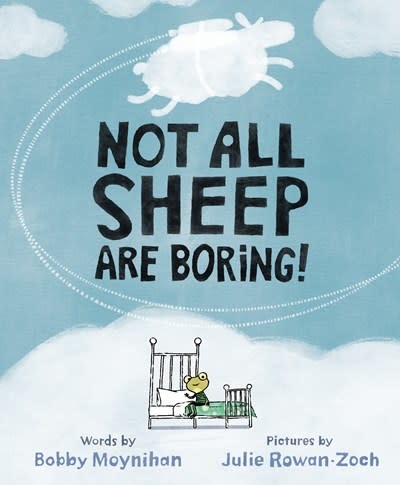 Not All Sheep Are Boring!

Everyone knows that sheep are boring. That's why people count them to fall asleep. Right? Don't be so sure...

Actor Bobby Moynihan's (SNL) debut picture book proves sheep are anything but snoozeworthy, introducing a cast of the weirdest, wackiest, funniest sheep you've ever seen. From riding jetpacks to prancing on the moon, it's safe to say these might be the LEAST boring sheep you've ever encountered. Julie Rowan-Zoch's lovably goofy artwork pairs with a breathlessly silly text to make this the perfect read-aloud—but don't be surprised if the giggles keep you up long past bedtime!

Bobby Moynihan is best known for his nearly ten years as a cast member on Saturday Night Live. He has voiced characters on Disney's DuckTales and We Bare Bears, in addition to many other roles, and currently portrays Jayden Kwapis on the sitcom Mr. Mayor. He is also the creator, executive producer, director, writer, and star of Loafy. Follow him on Instagram and Twitter @bibbymoynihan.

Julie Rowan-Zoch grew up collecting freckles and chasing hermit crabs in New York, and spent years slicing rich breads in Germany before waking up to 300 days of blue Colorado skies. She is the author of I'm a Hare, So There! and the illustrator of Louis by Tom Lichtenheld. Follow Julie on Twitter @JulieRowanZoch and on Instagram @jrzoch.