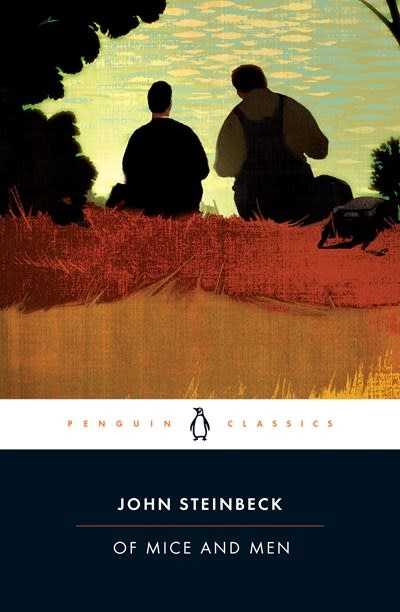 Of Mice and Men (Penguin Classics)

A controversial tale of friendship and tragedy during the Great Depression

Over seventy-five years since its first publication, Steinbeck’s tale of commitment, loneliness, hope, and loss remains one of America’s most widely read and taught novels. An unlikely pair, George and Lennie, two migrant workers in California during the Great Depression, grasp for their American Dream. They hustle work when they can, living a hand-to-mouth existence. For George and Lennie have a plan: to own an acre of land and a shack they can call their own. When they land jobs on a ranch in the Salinas Valley, the fulfillment of their dream seems to be within their grasp. But even George cannot guard Lennie from the provocations, nor predict the consequences of Lennie's unswerving obedience to the things George taught him.

Of Mice and Men represents an experiment in form, which Steinbeck described as “a kind of playable novel, written in a novel form but so scened and set that it can be played as it stands.” A rarity in American letters, it achieved remarkable success as a novel, a Broadway play, and three acclaimed films. This edition features an introduction by Susan Shillinglaw, one of today’s leading Steinbeck scholars.

John Steinbeck, born in Salinas, California, in 1902, grew up in a fertile agricultural valley, about twenty-five miles from the Pacific Coast. Both the valley and the coast would serve as settings for some of his best fiction. In 1919 he went to Stanford University, where he intermittently enrolled in literature and writing courses until he left in 1925 without taking a degree. During the next five years he supported himself as a laborer and journalist in New York City, all the time working on his first novel, Cup of Gold (1929).

Early in the 1940s, Steinbeck became a filmmaker with The Forgotten Village (1941) and a serious student of marine biology with Sea of Cortez (1941). He devoted his services to the war, writing Bombs Away (1942) and the controversial play-novelette The Moon is Down (1942).Cannery Row (1945), The Wayward Bus (1948), another experimental drama, Burning Bright(1950), and The Log from the Sea of Cortez (1951) preceded publication of the monumental East of Eden (1952), an ambitious saga of the Salinas Valley and his own family’s history.

The last decades of his life were spent in New York City and Sag Harbor with his third wife, with whom he traveled widely. Later books include Sweet Thursday (1954), The Short Reign of Pippin IV: A Fabrication (1957), Once There Was a War (1958), The Winter of Our Discontent (1961),Travels with Charley in Search of America (1962), America and Americans (1966), and the posthumously published Journal of a Novel: The East of Eden Letters (1969), Viva Zapata!(1975), The Acts of King Arthur and His Noble Knights (1976), and Working Days: The Journals of The Grapes of Wrath (1989).

Susan Shillinglaw is a professor of English San Jose State University. She is the author of On Reading the Grapes of Wrath and Carol and John Steinbeck: Portrait of a Marriage.