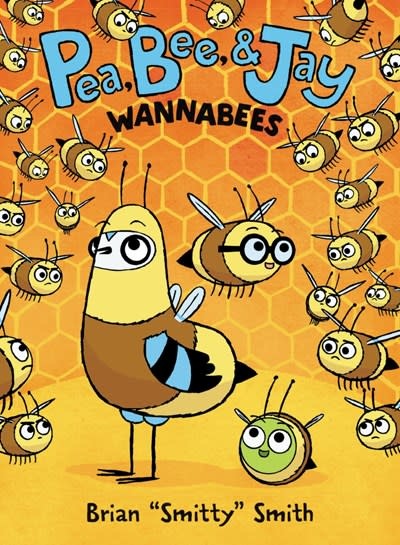 In the second book of a series by Brian "Smitty" Smith in his children's author-illustrator debut, meet Pea, Bee, and Jay—three unlikely heroes who band together to help each other out in a time of need. Pea, Bee, & Jay is a new graphic early reader series perfect for fans of Narwhal and Jelly.

Pea, Bee, and Jay are back in the second installment of this playful series.Being queen comes with a lot of responsibility, and all Bee really wants to do is play with her two best friends, Pea and Jay. But when she’s replaced by an ambitious bee named Lenny as queen of her hive, the friends set out to prove Lenny isn’t exactly who he seems to be. Can Bee, with the help of her friends, restore her throne and crown, or has the Reign of Lenny officially begun?

Brian “Smitty” Smith is a former Marvel Comics and DC Comics editor. He is the cocreator and writer behind the New York Times bestselling graphic novel The Stuff of Legend, the cartoonist of Tree Mail, and the winner of the Kids Read Comics “Most Epic Adventure” award. Smitty lives in Greensboro, North Carolina.