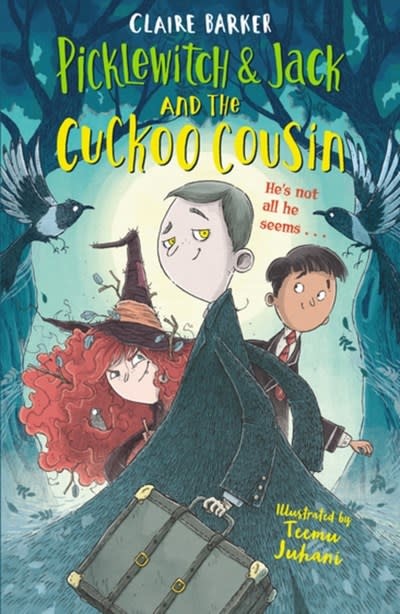 The second title in the hilarious Picklewitch and Jack series

tells ME what to do BECUZ…

I DUZ what I LIKES

and I LIKES what I DUZ

When she receives a letter from her cousin Archie Cuckoo, telling her he’s coming to stay, Jack worries that she’ll lose interest in him. But this new cousin turns out to be unexpectedly nice, and it’s Picklewitch whose nose is put out of joint when Archie and Jack get along really well.

But Archie is not all he seems, and soon both Picklewitch and Jack realise there are sinister plans afoot!

Claire Barker is an author and illustrator. When she's not busy doing this she spends her days wrestling sheep, battling through nettle patches and triumphantly catching rogue chickens. She used to live on narrow-boats but now lives with her delightful family on a small, untidy farm in deepest, darkest Devon. She is a regular helper at her local school and still loves nothing more than losing herself in a good story. Claire is the author of middle grade animal fantasy fiction series Knitbone Pepper.Teemu Juhani is a Finnish illustrator, comic artist and graphic designer based in London. Born and raised in a land of snow and northern lights, he grew up holding his pencil and dreaming of superheroes. Teemu has studied graphic design and illustration in both Finland and the Netherlands. Currently he's most likely eating some cookies.