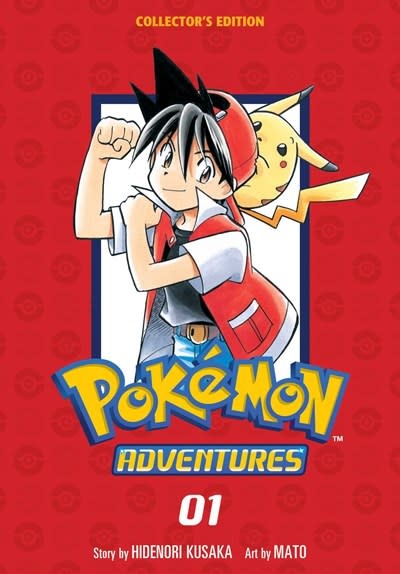 All your favorite Pokémon game characters jump out of the screen into the pages of this action-packed manga!

A stylish new omnibus edition of the best-selling Pokémon Adventures manga, collecting all the original volumes of the series you know and love.

When Pokémon Trainer Red encounters a challenger he can’t fight alone, he must join up with Blue, his former nemesis, and Green, a thief. This unlikely trio and their Pokémon will need to learn to work as a team if they’re going to defeat their mutual enemy!

Hidenori Kusaka is the writer for VIZ Media’s Pokémon Adventures. Running continuously for over 20 years, Pokémon Adventures is the only manga series to completely cover all the Pokémon games and has become one of the most popular series of all time. Kusaka is currently working on the 14th story arc, Pokémon: Sun & Moon. In addition to writing manga, he also edits children’s books and plans mixed-media projects for Shogakukan’s children’s magazines. He uses the Pokémon Electrode as his author portrait.

Mato was born in Aichi Prefecture on November 27. Her astrological sign is Sagittarius. Her first manga story, "New Year X-mas," appeared in 1993 in the magazine Shonen Sunday. Her best-known works include the title Nightingale.