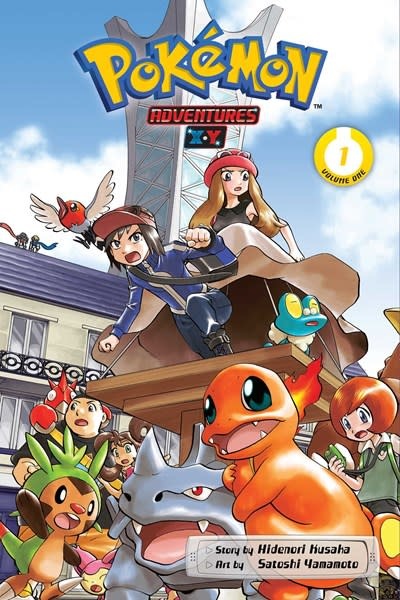 X was a Pokémon Trainer child prodigy. He hated the shine of the spotlight, so he took to hiding in his room and avoiding everyone—including his best friend Y. But now a surprise attack has brought X out of hiding!

X, the champion of the Pokémon Battle Junior Tournament in the Kalar region, reluctantly ends his self-imposed exile when his hometown of Vaniville Town is suddenly in big trouble. Can the reclusive X and the heroic Y help their friends ward off two Legendary Pokémon and the mysterious Team Flare?!

Hidenori Kusaka is the writer for Pokémon Adventures. Running continuously for over 20 years, Pokémon Adventures is the only manga series to completely cover all the Pokémon games and has become one of the most popular series of all time. In addition to writing manga, he also edits children’s books and plans mixed-media projects for Shogakukan’s children’s magazines. He uses the Pokémon Electrode as his author portrait.

Satoshi Yamamoto is the artist for Pokémon Adventures, which he began working on in 2001, starting with volume 10. Yamamoto launched his manga career in 1993 with the horror-action title Kimen Senshi, which ran in Shogakukan’s Weekly Shonen Sunday magazine, followed by the series Kaze no Denshosha. Yamamoto’s favorite manga creators/artists include FUJIKO F FUJIO (Doraemon), Yukinobu Hoshino (2001 Nights) and Katsuhiro Otomo (Akira). He loves films, monsters, detective novels and punk rock music. He uses the Pokémon Swalot as his artist portrait.