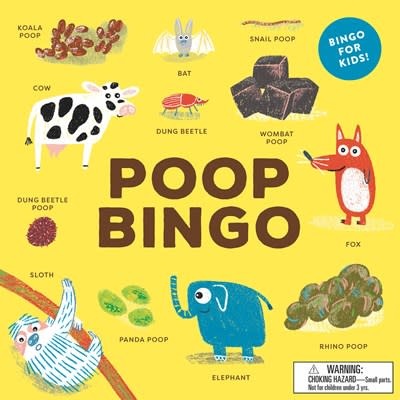 Discover all you ever wanted to know about poop – and more – with Poop Bingo! Featuring 24 animals and their uniquely shaped poops, this is the bingo game to end all bingo games. Kids will delight in discovering that wombats poop in cubes and that penguins poop in squirts that come in different colors depending on what they've eaten! Be the first to fill your game card with animals and poops to win BINGO!

Beautifully packaged, Poop Bingo is gorgeously illustrated by award-winning illustrator Claudia Boldt while also containing an informative booklet with all the things you wanted to know – and never dared to ask – about animals and their poops, written by Aidan Onn.

Animals that are featured include: ants, bats, bears, beetles, cats, cows, elephants, horses, koalas, mice, penguins, pandas, rhinos, snails, vultures and many more. Did you know that the microscopic demodex mite (often called an eyelash mite because it lives on our faces) is the only creature (that we know of) that never needs to poop? Read about this and other fun and smelly facts in the accompanying booklet.

Poop Bingo comes complete with a fully illustrated board, chips, a small container to store them in, eight double-sided game cards and counters ready for players to mark up their cards and score those points!

Claudia Boldt grew up in Cologne, Germany, and moved to the UK to study at the Glasgow School of Art and then Kingston University. Her illustrations appear in many newspapers and publications, and she has written and illustrated a number of books – most recently for Tate Publishing. She is the recipient of a Booktrust Best New Illustrator award and her work has been shown at the Bologna Illustrators Exhibition. Her absolute favourite animals to draw are sausage dogs.

Writer Aidan Onn was born in the UK but grew up in Hong Kong. After returning to the UK to study design and film production, he settled in London.