Home » Rabbit & Bear: A Bite In the Night 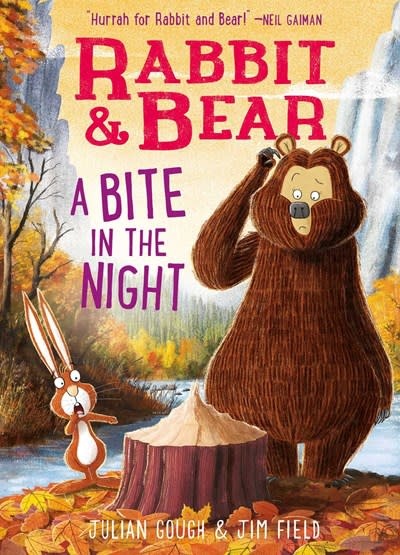 Rabbit & Bear: A Bite In the Night

Rabbit and Bear must find out who’s uprooted not only their favorite trees, but their entire homes in another enchanting tale from creative geniuses Julian Gough and Jim Field.

When Rabbit and Bear discover a new creature in the forest and learn about his plans for "progress," the comical pair—along with the rest of the excitable residents—have a thing or two to say about the matter. An endearing lesson on the wise mathematics of friendship, this charming follow-up to The Pest in the Nest is a hysterical addition to this beloved series.

Julian Gough is an award-winning novelist, playwright, poet, musician, and scriptwriter. He was born in London, grew up in Ireland, and now lives in Berlin. Among many other things, Julian wrote the wonderful novel Connect, and the ending to Minecraft, the world’s most successful computer game for children of all ages. He likes to drink coffee and steal pigs.

Jim Field is an award-winning illustrator, character designer, and animation director. He grew up in Farnborough, worked in London, and now lives in Paris. His first picture book, Cats Ahoy!, written by Peter Bently, won the Booktrust Roald Dahl Funny Prize. He is perhaps best known for drawing frogs on logs in the bestselling Oi Frog. He likes playing the guitar and drinking coffee.