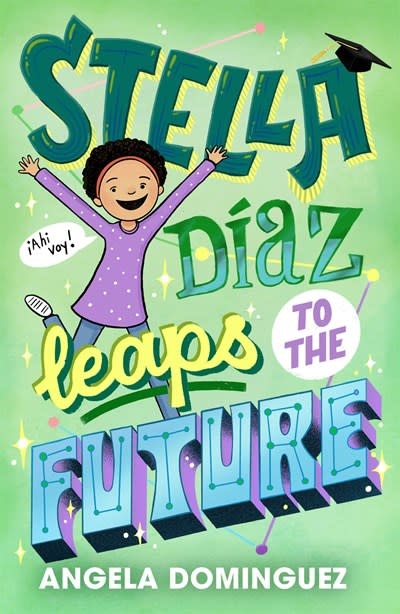 Stella Diaz Leaps to the Future

From award-winning author Angela Dominguez, the fifth and final novel about Stella Díaz, a shy Mexican American girl who speaks up to make a difference in her community.

Stella is getting ready for her next big step.

This year, she's a fifth grader, which means not only is she one of the big kids in her elementary school but she'll also have to start thinking about middle school. GULP!

Luckily, Stella can count on having her best friends Jenny and Stanley at her side. But when she has a chance to apply for an art program at a magnet school, Stella realizes that her future might hold a lot of big changes.

Thinking about going to a different school than her closest friends, seeing her big brother Nick receiving mail from colleges far away, and then being forced to work on a project with her former bully—suddenly, growing up isn’t quite as fun as Stella first thought.

Is Stella ready for what's next?

Angela Dominguez was born in Mexico City and grew up in the great state of Texas. She is the author and illustrator of several books for children and a two-time recipient of a Pura Belpré Illustration Honor. Her debut middle-grade novel, Stella Díaz Has Something to Say, was a New York Public Library and a Chicago Public Library pick for Best Books for Kids, winner of the Sid Fleischman Award winner, and an ALA Notable Book. She recently illustrated Supreme Court Justice Sonia Sotomayor’s newest picture book, Just Help!: How to Build a Better World. angeladominguezbooks.com