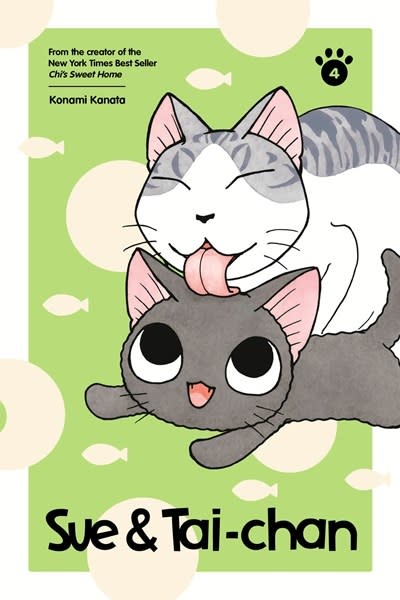 The adorable new odd-couple cat comedy manga from the creator of the beloved Chi’s Sweet Home and Chi’s Sweet Adventures, in full color and formatted for English readers, just like Chi!

Sue is an aging housecat who’s looking forward to living out her life in peace…but her plans change when the mischievous black tomcat Tai-chan enters the picture! Hey! Sue never signed up to be a catsitter! Sue and Tai-chan is the latest from the reigning meow-narch of cute kitty comics, Kanata Konami.

Konami Kanata was born on July 3, 1958, in Nagano, Japan. A veteran manga artist Konami made her professional debut in 1982 with the serialized comic Petit Cat Jam-Jam for Kodansha’s seminal shoujo manga magazine NakaYoshi. The daughter of an elementary school teacher, most of Konami’s stories are for readers of all ages making her one of the most accessible artists in recent history. In her nearly thirty year career, Konami has penned more than a dozen comic series, with the majority of them focusing on cats and pets. Konami is well regarded within the pet-manga community for her keen sense of cat ecology. Her ability to observe and render feline behavior has earned her respect from the Japanese manga community as a whole. While most of her properties were published for a younger female demographic, her most recent series Chi’s Sweet Home is currently being published by Kodansha’s Morning magazine, Japan’s leading comic magazine for adult readers, proving that quality can be found even in the cutest of sources.