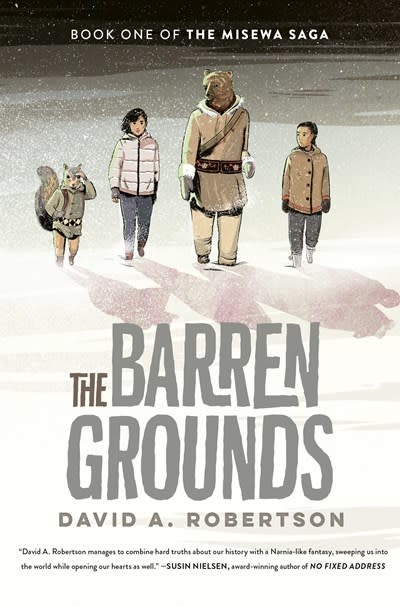 By David A. Robertson

Morgan and Eli, two Indigenous children forced away from their families and communities, are brought together in a foster home in Winnipeg, Manitoba. They each feel disconnected, from their culture and each other, and struggle to fit in at school and at their new home—until they find a secret place, walled off in an unfinished attic bedroom. A portal opens to another reality, Askí, bringing them onto frozen, barren grounds, where they meet Ochek (Fisher). The only hunter supporting his starving community, Misewa, Ochek welcomes the human children, teaching them traditional ways to survive. But as the need for food becomes desperate, they embark on a dangerous mission. Accompanied by Arik, a sassy Squirrel they catch stealing from the trapline, they try to save Misewa before the icy grip of winter freezes everything—including them.

Series Overview: This series reflects stories of the sky and the constellations held within its great canvas. The word “misewa” is Cree for “all that is”—elders say that what is above is mirrored below, and this is the connection we have with misewa.

DAVID A. ROBERTSON is the author of numerous books for young readers including When We Were Alone, which won the 2017 Governor General’s Literary Award and was nominated for the TD Canadian Children’s Literature Award. Strangers, the first book in his Reckoner trilogy, a young adult supernatural mystery, won the 2018 Michael Van Rooy Award for Genre Fiction (Manitoba Book Awards). A sought-after speaker and educator, Dave is a member of the Norway House Cree Nation and currently lives in Winnipeg. For more information, visit his website: www.darobertson.ca and follow him on Twitter: @DaveAlexRoberts