Home » The Cricket in Times Square 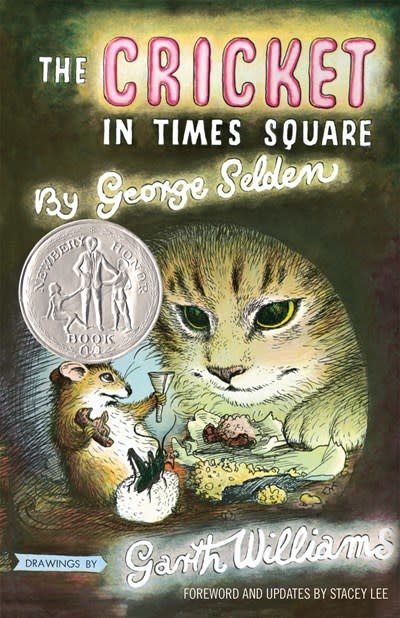 The Cricket in Times Square

Ages 6 to 9
An updated version of the timeless children's classic featuring a business-savvy mouse, a kind alley cat, and a talented country cricket, featuring a new foreword and thoughtful revisions by YA author Stacey Lee.

Tucker is a streetwise city mouse. He thought he'd seen it all. But he's never met a cricket before, which really isn't surprising, because, along with his friend Harry Cat, Tucker lives in the very heart of New York City—the Times Square subway station.

Chester Cricket never intended to leave his Connecticut meadow. He'd be there still if he hadn't followed the entrancing aroma of liverwurst right into someone's picnic basket. Now, like any tourist in the city, he wants to look around. And he could not have found two better guides—and friends—than Tucker and Harry. The trio have many adventures—from taking in the sights and sounds of Broadway to escaping a smoky fire.

Chester makes a third friend, too. It is a boy, Mario, who rescues Chester from a dusty corner of the subway station and brings him to live in the safety of his parents' newsstand. He hopes at first to keep Chester as a pet, but Mario soon understands that the cricket is more than that. Because Chester has a hidden talent and no one—not even Chester himself—realizes that the little country cricket may just be able to teach even the toughest New Yorkers a thing or two.