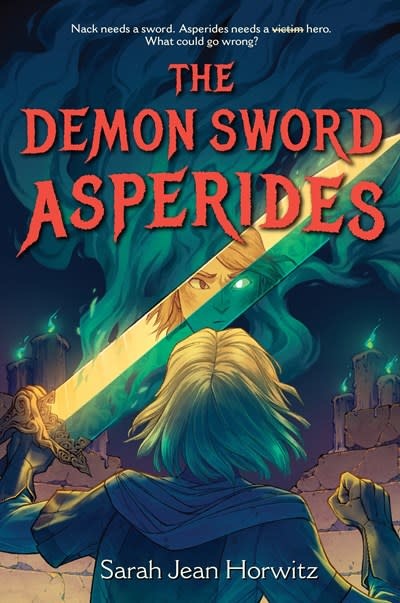 A scheming demon sword and a wannabe knight band together on a (possibly wicked) quest in this fantasy, perfect for fans of Diana Wynne Jones and Terry Pratchett.

For the past two hundred years, the demon sword Asperides has led a quiet life. While his physical form has been tasked with guarding the body of an evil sorcerer, the rest of his consciousness has taken a well-earned vacation. That constant need to trick humans into wielding him (at the price of their very souls, of course) was rather draining.

Nack Furnival, on the other hand, is far from satisfied with his existence. Nack has trained since birth to be a brave and noble knight—but, unfortunately, he isn’t especially good at it. Determined to prove his worth, Nack needs a quest. And to complete that quest, he’ll need the one thing no knight can do without: a sword.

When an attempt to resurrect the evil sorcerer throws Asperides into Nack’s path, the demon sword can’t help but trick the boy into making a contract to become his new owner. And with the newly undead (and very, very angry) sorcerer on their trail, Asperides and Nack find themselves swept up in a bigger adventure than either of them bargained for: saving the world.

Sarah Jean Horwitz was raised in suburban New Jersey, where she lived next door to a cemetery and down the street from an abandoned fairy tale theme park, which probably explains a lot. Her love of storytelling grew from listening to her mother’s original “fractured” fairy tales, a childhood spent in community theater, and far too many rereads of her favorite fantasy books. She now lives with her spouse in Massachusetts, where she somehow ended up down the street from a cemetery again. (No knights in shining armor or wizards' towers in sight this time, though.) Find Sarah Jean online at sarahjeanhorwitz.com.