Home » The Life and Times of Jo Mora 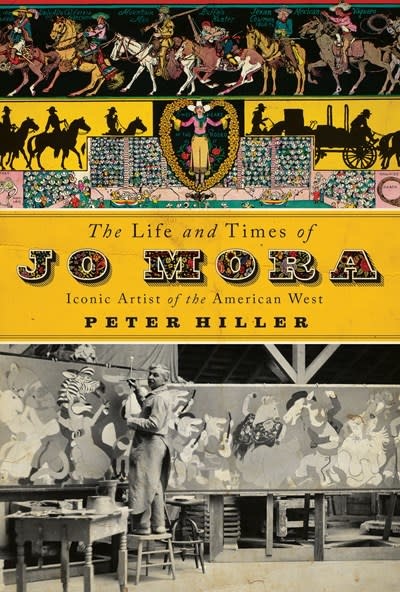 The Life and Times of Jo Mora

An essential addition to any collection of Western art and Americana, The Life and Times of Jo Mora provides an in-depth biography of this gifted illustrator, painter, writer, cartographer, and sculptor.

Jo Mora (1876–1947) lived the Western life he depicted in his prolific body of visual art, comprising sculpture, paintings, architectural adornments, dioramas, and maps. He explored California Missions, the natural glories of Yosemite, California’s ranch life, and eventually the culture of the Hopi and Navajo in Arizona. During his travels, Mora documented observations that became the source material and inspiration for much of his later artwork.

The magnitude of Mora’s insights into his life and work, as described in his own words—many presented here in this book—cannot be underestimated. Jo Mora’s many diaries, journals, and literary efforts reveal an intellectual discernment, originality, and humor that enhance our appreciation of his work.

Remarkably, throughout his life Mora supported his family solely through a series of art commissions that ranged from restaurant murals to heroic-scale sculpture. He welcomed risks and challenges, was unafraid of hard work, and did nearly everything well, from writing children’s stories to commanding an army battalion-in-training to shooting mountain lions. Ever modest, he seemed to think that this versatility was nothing extraordinary. With Peter Hiller’s thoughtful presentation, Jo Mora’s life is seen here in all of its creative glory.

Living a life engrossed in the visual arts has allowed author Peter Hiller to express his creativity through his own art, and to share that experience with students during a teaching career of almost forty years. His discovery of the world of Jo Mora opened new doors of interest as he endeavored to uncover Mora’s seemingly endless creative abilities and accomplishments. This biography is the culmination of more than twenty-five years of striving to understand and appreciate this important artist. Since 1981, Hiller has been fortunate to live on the Monterey Peninsula with his wife of forty-eight years. He is the proud father of two grown sons.