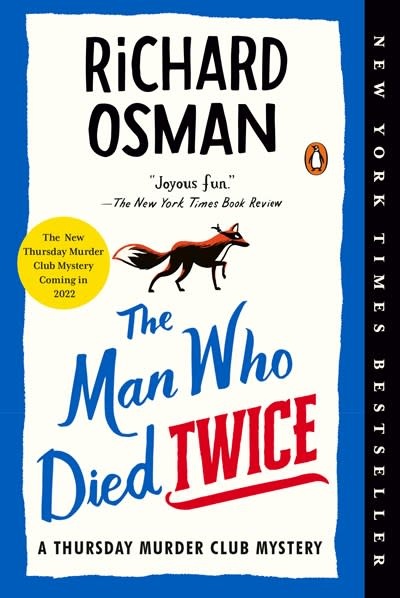 An instant New York Times bestseller in hardcover, this is the second gripping novel in the Thursday Murder Club series, soon to be a major motion picture from Steven Spielberg at Amblin Entertainment

Elizabeth, Joyce, Ron and Ibrahim—the Thursday Murder Club—are still riding high off their recent real-life murder case and are looking forward to a bit of peace and quiet at Cooper’s Chase, their posh retirement village.

But they are out of luck.

An unexpected visitor—an old pal of Elizabeth’s (or perhaps more than just a pal?)—arrives, desperate for her help. He has been accused of stealing diamonds worth millions from the wrong men and he’s seriously on the lam.

Then, as night follows day, the first body is found. But not the last. Elizabeth, Joyce, Ron and Ibrahim are up against a ruthless murderer who wouldn’t bat an eyelid at knocking off four septuagenarians. Can our four friends catch the killer before the killer catches them?  And if they find the diamonds, too? Well, wouldn’t that be a bonus?  You should never put anything beyond the Thursday Murder Club.

Richard Osman is back with everyone’s favorite mystery-solving quartet, and the second installment of The Thursday Murder Club series is just as clever and warm as the first—an unputdownable, laugh-out-loud pleasure of a read.

Richard Osman is an author, producer, and television presenter. His first novel, The Thursday Murder Club, sold more than one million copies, and was a #1 international bestseller along with his second book, The Man Who Died Twice. The third installment in his Thursday Murder Club series is forthcoming.