Home » The Monster in the Lake 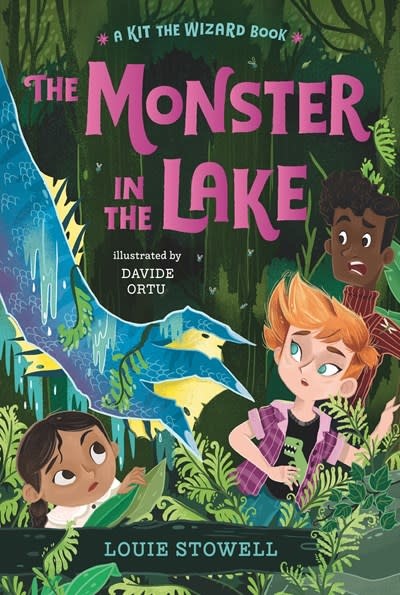 The Monster in the Lake

When wild magic starts causing trouble at the park, wizard Kit and her friends investigate—and find themselves on another journey to save the world. A lively and witty sequel to The Dragon in the Library.

Kit may be the youngest wizard ever, but she sure doesn’t feel like the best wizard. Her magic just keeps going wrong, and other weird stuff is happening, too: talking animals, exploding fireballs, and a very strange new arrival in the local park. Even Dogon (the half dog, half dragon) is droopy! So Kit and her two best friends—animal-whispering Alita and studious Josh—set off with Faith the librarian to investigate this wild magic that’s causing so much commotion. Their journey takes them to a Scottish loch, where they meet an eco-conscious wizard and some very grumpy mermaids (careful, they pinch!). But the danger is greater than they imagined, and it will take everybody’s help to set things right again. This action-packed adventure features plenty of humor, a diverse cast, and delightful illustrations.

Louie Stowell started her career writing carefully researched books about space, ancient Egypt, politics, and science, but she eventually lapsed into just making stuff up. She likes writing about dragons, wizards, vampires, fairies, monsters, and parallel worlds. Louie Stowell, a longtime publishing professional, lives in London with her wife, Karen; her dog, Buffy; and a creepy puppet that is probably cursed.

Davide Ortu is an Italian artist who began his career in graphic design before discovering children’s book illustration. He is on a quest to conjure colorful and fantastic places where time stops to offer the biggest emotions to the smallest people. Davide Ortu lives in Spain.