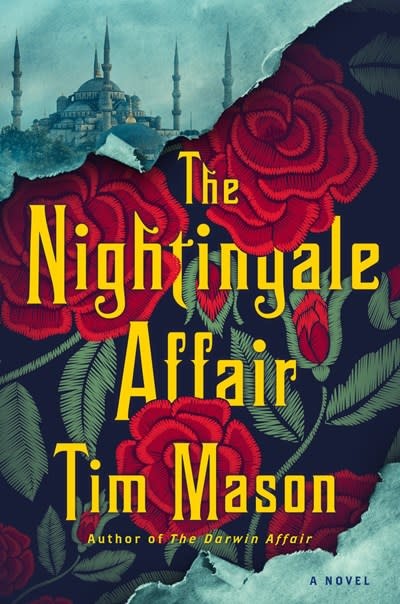 Inspector Charles Field hunts a serial killer targeting Florence Nightingale's nurses in Crimea and women in London in this twisty new Victorian detective thriller from the author of The Darwin Affair.

Who is stalking Florence Nightingale and her nurses? Is it the legendary Beast of the Crimea, or someone closer to home? In 1855, Britain and France are fighting to keep the Russians from snatching the Crimean Peninsula from the Ottoman Empire, and the wealthy young society woman has made it her mission to improve the wretched conditions in the British military hospitals in Turkey—despite fierce objections from the male doctors around her. When Nightingale’s young women start turning up dead, their mouths sewn shut with embroidered fabric roses, Inspector Charles Field (a real-life police detective who was also the model for Charles Dickens’s Inspector Bucket in Bleak House), is sent from England to find the killer among the doctors, military men, journalists, and others swarming Turkey’s famous Barrack Hospital. Here Field meets both the famous Nightingale as well as Nurse Jane Rolly, the woman who will become his wife, and as he races to protect them, the prime suspect takes his own life. Case closed. Or is it?

Twelve years later, back in London, amidst the turmoil surrounding the expansion of voting rights, women again start turning up dead, their mouths again covered by the telltale embroidered rose. Did Field suspect the wrong man before, or is he dealing with a deviant copycat? Either way, he must race against time to stop the killer before more bodies turn up, and before his own daughter loses her life. Populated with real figures of the day, from Benjamin Disraeli to novelist Wilkie Collins to, of course, the saintly Florence Nightingale herself, and steeped in historical details of 1860s London, The Nightingale Affair plays out against a backdrop of a rapidly changing society. Most of all, it is a pure reading delight, offering shocks, unforgettably vivid scenes, and surprising twists.

Tim Mason is a playwright whose work has been produced in New York City, throughout the United States, and around the world. Among the awards he has received are a Kennedy Center Award, the Hollywood Drama-Logue Award, a fellowship from the National Endowment for the Arts, and a Rockefeller Foundation grant. In addition to his dramatic plays, he wrote the book for Dr. Seuss’s How the Grinch Stole Christmas! The Musical, which had two seasons on Broadway and tours nationally every year. He is the author of the young adult novel The Last Synapsid. The Darwin Affair was his first adult novel.