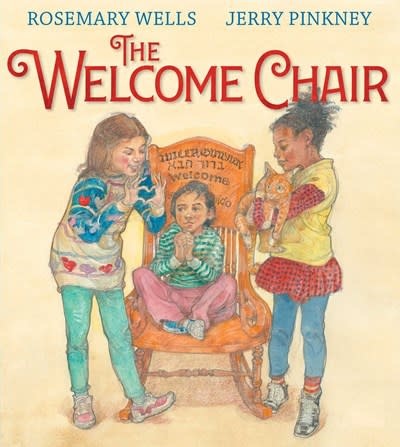 Based in part on a 100-year-old family journal, Rosemary Wells brings to life a story that the diary’s fragile pages tell. It’s the story of a wooden rocking chair handmade in about 1825 by her great-great grandfather, an immigrant Jewish boy who made his way to America from Germany in the early 1800s.

In 1807, Sam Siebert is born in southern Germany. Sam’s favorite pastime is carpentry, much to his father’s displeasure. His mother says he has a gift from God in his hands. After moving to America, he builds a wooden chair with the word WILLKOMMEN on the back. The chair’s back panel was later marked with welcomes by four generations of the family in four different languages.

After the family lost track of the old chair, the author created a new life for it among new owners from other corners of the world. All the families who loved the chair came to America, escaping religious conformity, natural disasters, tyrannies, war, and superstition. In its lifetime, the rocking chair, with its earliest word WILLKOMMEN, stood for openness, hospitality, and acceptance to all who owned it or rocked safely in its embrace.

Rosemary Wells is the author of more than one hundred and twenty books for children in her forty-five-year career, including more than forty about the beloved bunnies, Max and Ruby, who star in their own television show on Nick Jr. She lives in New England. Visit her online at RosemaryWells.com. 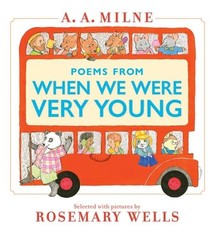 Poems from When We Were Very Young