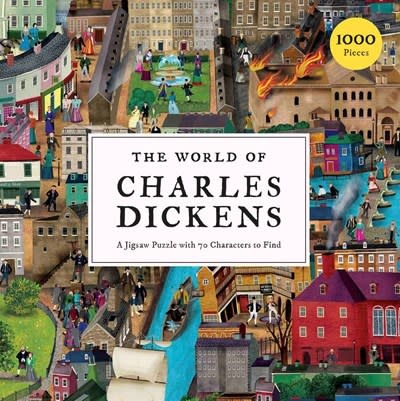 Venture into the realm of Dickens's imagination in the next in this best-selling jigsaw series celebrating remarkable fictional worlds. Will you brave the back alleys to find Fagin's den, or risk Scrooge's scowl by observing him counting his pennies? Dickens himself and his notable Victorian contemporaries can be found among the hosts of unforgettable characters from his famous novels. From the villainous comedy of Uriah Heep peeking out of a window to the universal heartache represented by Miss Havisham's stopped clock, Dickens fans will – like Oliver – find themselves asking for more as they build this 1000-piece puzzle and relive the dramas hidden within.

Barry Falls is an illustrator based in Belfast, Northern Ireland, UK. He has worked for The New York Times, The Guardian, American Airlines, Unicef, and Random House.