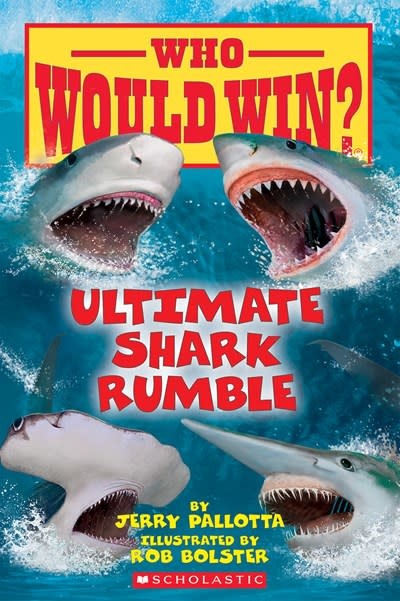 Ultimate Shark Rumble (Who Would Win?)

Sixteen different sharks battle it out in a huge underwater fight! Who will be the champion?

This nonfiction reader compares and contrasts 16 ferocious sharks. Readers will learn about each animal's anatomy, behavior, and more. Then compare and contrast the battling animals before finally discovering the winner! This nonfiction series is full of facts, photos, and realistic illustrations, and it includes a range of mammals, sea creatures, insects, and dinosaurs to satisfy all kinds of animal fans.

JERRY PALLOTTA is an award-winning author of children's books, including What I Saw in the Teachers' Lounge, Dinosaur Christmas, Who Will Guide My Sleigh Tonight?, Apple Fractions, and The Hershey's Milk Chocolate Multiplication Book. His combination of interesting facts, detailed research, humor, and realistic illustrations has mesmerized countless children across the United States. You can visit him at jerrypallotta.com.

ROB BOLSTER is both a fine artist and a professional illustrator. His work has appeared in newspaper and magazine advertisements, and he has illustrated many books for young readers, including the bestselling Who Would Win? series. Rob lives and works near Boston, Massachusetts.