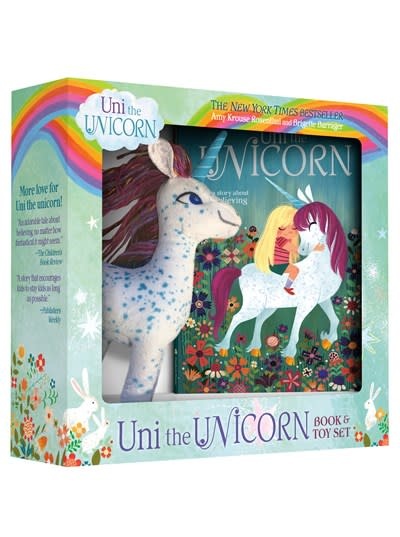 The magical story of friendship, unicorns, and the power of believing is now available as a book and toy set!

In this clever twist on the age-old belief that there’s no such thing as unicorns, Uni the unicorn is told there’s no such thing as little girls! No matter what the grown-up unicorns say, Uni believes that little girls are real. Somewhere there must be a smart, strong, wonderful, magical little girl waiting to be best friends. In fact, far away (but not too far), a real little girl believes there is a unicorn waiting for her. This refreshing and sweet story of friendship reminds believers and nonbelievers alike that sometimes wishes really can come true.

This special edition includes a smaller Paper-over-Board edition of Uni the Unicorn along with a Uni plush toy!

AMY KROUSE ROSENTHAL (Uni the Unicorn; Uni the Unicorn and the Dream Come True) was born in 1965, and graduated from Tufts University. A prolific writer, speaker, film maker, and radio show host, she also contributed to TED Talks and wrote several adult and children’s books. She lived in Chicago with her husband and children for several years, and then announced on March 3, 2017, that she was terminally ill with cancer. Her essay for the Modern Love column in the New York Times, entitled “You May Want to Marry My Husband,” went viral online. She died on March 13, 2017.

BRIGETTE BARRAGER graduated from CalArts with a BFA in Character Animation in 2007. She likes tea and books and general old lady-ish stuff, and hates when people’s toes hang over the edge of their sandals. Visit her at:

BRIGETTE BARRAGER graduated from CalArts with a BFA in Character Animation in 2007. She likes tea and books and general old lady-ish stuff, and hates when people's toes hang over the edge of their sandals. Visit her at: http://brigetteb.blogspot.com/