Home » We Own the Sky 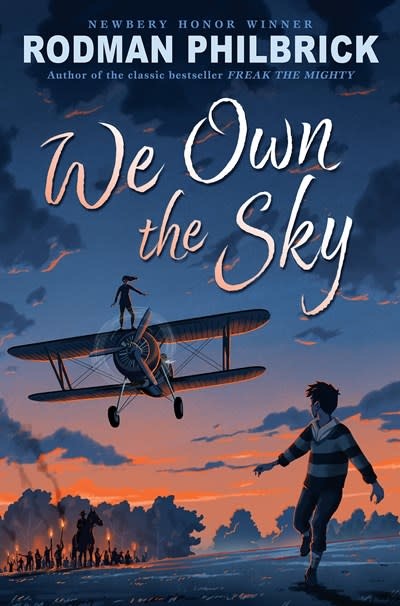 We Own the Sky

A thrilling historical adventure about the rise of the KKK in Maine by the master of adventure himself, Rodman Philbrick. It combines the page-turning action of Wildfire with the historical depth and impact of Newbery Honor-winning The Mostly True Adventures of Homer P. Figg.It's Maine, 1924, and the Ku Klux Klan is on the rise.Davy and Jo Michaud have been recently orphaned. Taken in by a distant relative—a famous aviator—they are now working with a group of stunt pilots who spend their time wing walking, leaping from plane to plane, and flying through fireworks! But though the stunts are dangerous, the real threat is building behind the scenes.The KKK is on the rise in in Maine that summer, inspired by the racial fears promoted in Birth of a Nation. They spew hatred of immigrants, Blacks, Jews, and French Catholics—that last, a rage that will be directed at Davy and Jo.When Davy and Jo cross paths with the Klan, they get tangled up in a terrible revenge plan, and held as hostages. Can they escape with their lives?

Newbery Honor author Rodman Philbrick has written more than a dozen novels for young readers. In 1993, he published his first children's book, Freak the Mighty, which became an instant classic, and was made into a feature film. The Mostly True Adventures of Homer P. Figg was a 2010 Newbery Honor Book. Philbrick's other acclaimed novels include Max the Mighty, The Young Man and the Sea, The Last Book in the Universe, Zane and the Hurricane, and Wildfire. Philbrick divides his time between Maine and the Florida Keys. You can learn more about him on his website: rodmanphilbrick.com.