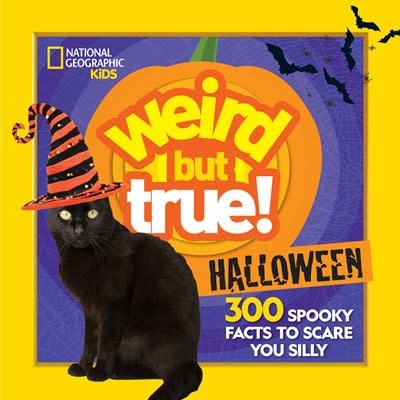 The wildly popular Weird But True! line is all dressed up for Halloween with 300 all-new spooky facts about candy, costumes, pumpkin carving, and more!

Calling all boys and ghouls: You’re in for a treat of freaky facts, stats, tidbits, and trivia about one of the most popular holidays! Did you know that there is an underwater pumpkin carving contest? Or that the U.S. Defense Department has a zombie apocalypse plan? Maybe you’d be amazed to discover that there are more Halloween emojis than there are U.S. states? It’s all weird—and it’s all true—in this latest and greatest edition, packed with hilarious and terrifying tidbits on Halloween!

Series Overview: Bursting onto the book scene in late 2009, Weird But True! paperbacks—with a distinct colorful design, whimsical typography, and square shape—became instant blockbusters. Now with 35+ paperbacks, hardcovers, a journal, day planner, and other spin-offs in the marketplace, the Weird But True! series has 7 million copies in print. Conceived as a monthly page in National Geographic Kids magazine in 2004, Weird But True has been the most popular feature every month since its inception.

NATIONAL GEOGRAPHIC KIDS inspires young adventurers to explore the world through its award-winning books, magazines, website, television series, radio show, apps, games, and events, and is the only major kids brand with a world-class scientific organization at its core.